December is always a busy month. It is a month filled with parties - here, there and everywhere. This year's December is not that different. The first party of this month for me and hubby would have to be the dedication of my niece, Una. Although we haven't seen her personally yet, we knew how she looked like through the pictures that her parents frequently post online. Unfortunately, we were not able to prepare any presents for her but we hope to be able to give her something for Christmas.

The weekend was busy for both me and hubby. We both had work to finish and although he was able to finish his, I knew I had to work until the weekend to finish mine. Last Saturday, my trip to the OB was moved to an earlier time. We were supposed to go to the Toy Fair at Megamall after that but upon realizing the distance of where we were, we decided against it. We saw a movie called "The Hobbit" instead. Movie review to follow later. We went home to Antipolo afterwards. Tired but happy, we slept at midnight after chit chatting about different things with my folks.

The next day, I finished all my work. We no longer went to the Toy Fair due to the terrible weather. It was raining cats and dogs. Funny, just when it seems we won't be able to go to Una's dedication, the rain stopped. After boarding the car, it started raining once again. When we arrived in Ortigas, we realized that it was carless day thus, it was harder to drive to the venue but luckily, there were parking lots nearby. Oddly enough despite not being stuck in traffic in areas far away from the venue, we found ourselves stuck in one near it. Good thing we were only 30 minutes late for the party.

As soon as we got there, we knew we would be greeted by all our relatives. It was nice to see them again after a long time. It was a surprise for them to see me six months pregnant and with a husband as that's how long I haven't seen them. I am glad they were accepting to the changes. Anyway, since the venue was on the roofdeck, we were a bit worried that it would rain again on a later schedule but we decided to hold that thought for later. Una's dedication was precided by her grandfather, my uncle, Uncle Arnold. During his opening speech, he mentioned that when Una's parents, Ate Fritzi and Kuya Rico were married, they also experienced a lot of rain before the ceremony started. Luckily, the sky cleared. Rain of course was a sign of blessings to come. At least that is what we believe.

After the dedication, it was time to dig in. I didn't know what to expect from the food there but somehow we all kept our fingers crossed that the food will be yummy. Thankfully, the food was okay. There were abour 3 or 4 viands available, one pasta and rice. We had Asparagus soup and salad for our appetizer while traditional sweets like Bibingka and Puto Bumbong were for desserts. I loved the Buttered Fish with garlic. I wasn't sure if it was made of Tanigue or something else but it was tasty. I also like the Roast Beef with Mashed Potatoes on the side. I wasn't able to eat any other main dishes as I was trying not to eat too much. The Bibingka was okay but I wasn't exactly a fan of the Puto Bumbong as I like the ones that we eat from Antipolo more. Macaroons were given to us as well.

We were given flat heart shaped ornaments and we were told to write a short dedication to Una on them. The whole decorate your own heart theme actually reminded me of what I asked our guests to do for us during our wedding. I still kept the box of dedications with me although I thought I should have done a better job in the theme. Anyway, the giveaways that were given to us were heart shaped ornaments and because my mom liked them a lot and we sat on a table with the rest of our relatives, they all gave theirs to her which she plans to add to our Christmas tree. Meanwhile, the centerpiece which looked like a mini Christmas tree, was a delight to look at. Which was why, my father and the rest of my relatives wanted to take one as well. At first, my uncle didn't approve of it but his wife just couldn't deny our requests.

In the end, we all went home with full bellies and happy hearts. We did not just have fun during the party but we were also able to spend some quality time with our relatives who we rarely see. The next reunion will be on December 27 and I am really looking forward to that. Oh, my bad! Christmas is the next one then comes the 27th. Either way, I know that December is a month filled with celebrations. Although I might not be as fit as I used to be, I hope that I will still have fun in all of them. Since I don't have presents to give for Christmas yet, I might just have to go with the Christmas rush this week. Good grief! I hope that I can make it. Thank you Lord for another wonderful December!~ 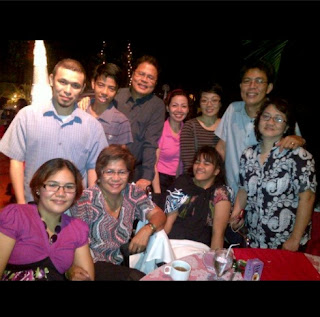 Too bad we were only able to have our photo taken with our relatives who sat with us in the same table. Perhaps we can have a more complete family picture next time. I can't wait! But I guess we need to use the panoramic view then since we know there are so many family members in our ever expanding clan. (Teofilo, Perona and Bernardo Clan -- In the picture) 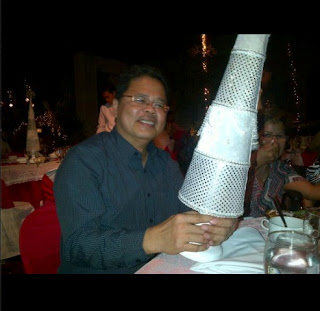 Dad holding on to the Christmas Tree centerpiece. He wanted to ask for more but since other people already took home theirs, all he could ask for was more souvenir hearts. Can't wait to see them on our Christmas Tree. Will take a lot of pictures this Christmas. I am so excited!~
Posted by kittypaws at 12:19 PM