It's Just A Bad Day, Not A Bad Life - My Unlucky Thursday Or So It Seemed 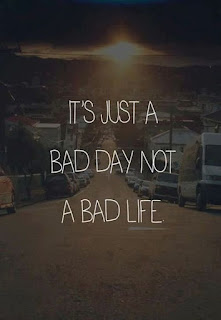 When your feelings get the worst of you...

Today has been an unlucky day so far. Ever since I left home to go to work, things haven't exactly been awesome. I rode on a bus to the nearest train station. The conductor nearly ripped me off with my bus fare. He probably thought I did not know the bus fare to where I was headed. I know that bus companies has fluctuating fare rates but this one was just too much. I paid him 40 pesos and expected at least 10-12 pesos as my change but he only gave me 2 pesos after giving me the tickets. This baffled me and somehow angered me. When he went back to ask for the fare of the newly seated passengers, I confronted him and told him about my usual bus fare. He argued with me and I thought he would keep on insisting that the bus fare to where I was headed was 38 pesos. Luckily, he did not. Seriously, why would some people do that? The bus ride was partially comfortable. Although I had to keep on moving seats because I initially had no choice but to sit in the back. I had to move 3 times just to be able to sit where I should be sitting. I got to the train station at 5:20 P.M. It was the start of rush hour. I already knew what I was going to get myself into. Or at least, that's what I thought.

When the train arrived, it wasn't so congested inside but once we got to the next 2 stations, the train just got so full that it was hard to breathe. This was a bad situation as I will need to excuse myself when my stop arrives and I am not sure if the people in the train will move for me. Sometimes they don't and that is my biggest daily challenge. Today, they did not. The people outside kept on shoving to board the train while some of us were struggling to get out of it. In the end, I had no choice but to push and shove to get out as well. I ended up hurting my elbow in the process. I just remembered hitting is somewhere hard but since it was so hard to see what I hit, I cannot say what caused the scratch. I kept walking until I reached the mall. When my elbow started stinging inside, I had to examine the damage. It was bleeding and I knew I had to clean the wound somehow. Since I always bring some tissue and isopropyl alcohol with me, I disinfected it. It hurt but I had no choice. Once I was done, I had to start walking again. My office was still a 15-20 minute walk from the mall after all.

I don't mind the whole walking to work bit. What I hate about it is that when I go to work, it is also the same time when most people go home. So the small sidewalk which is supposed to be a two way sidewalk ends up being a one way one. People just keep on walking and not caring about that fact. My wounded elbow got hit as I was walking on this said sidewalk. That made me more upset. I rushed to work because I knew that I will be starting my classes after 40 minutes. Although I was not late for work, I was already upset because of the series of unfortunate events. It is now 9:55 P.M. and as much as I want to think that nothing is wrong, there is. I had my first class for a certain student who I carelessly said goodbye to after only having a 20 minute class when we were supposed to have a 30 minute one. I only noticed it once I was already uploading my report and sending my recording. I had no choice but to tell the Korean owner of the incident. I was sure I would get scolded on. Luckily, I wasn't but was reminded to be more careful next time.

Work ended and I am a mess. I ended up treating myself and my husband to some fast food to cheer me up. As I told the story of how my day went to my husband, I realized I should change things for tomorrow to get better results. Meaning I have to leave home before 4 P.M., ride on an FX instead of a bus, get to the nearest MRT station before 5 P.M., arrive in Ortigas at 5:30 P.M. or before 6 P.M. and review my schedule before my classes start. Surely, I will have better days ahead of me after all the said changes.

Posted by kittypaws at 7:07 PM No comments: