I was never typical but so what?

I don't understand why I can't be like other girls or women around me. I guess I am different. I have always been. Growing up, I didn't feel like a girl at all. I was a tomboy, plain and simple. I preferred legos and guns over barbie dolls and make believe make up sets. I always liked dressing in rugged but comfortable shorts and pants rather than in frilly skirts and lacey dresses. I never did like putting lotion on my skin or putting lip gloss on my chapped lips. Funny how even if I know I wasn't acting like most girls, I still kept my hair long. I liked it when my hair had different ponytails or clips or better yet when I had to sport different hairstyles. Apparently though being different isn't always a good thing. Growing up, I never really realized that being what I was would cause me trouble in the future. In my younger years, I didn't mind playing with boys in our neighborhood or even in school. I remember playing the games that they used to play. I was happy and innocent back then.


I started playing with dolls when I was already about 10 and it was also the time when I realized how different I was. Most of my female classmates would make fun of me for being too close to my male classmates. They would tease me that I acted more masculine than feminine and that I wore shorts that looked like a boy's under my school uniform. They made rumors of me being a slut even if I didn't even know what that was then. I was shocked to find out all these things. What is even more shocking is that the person that told me about it is someone who isn't even close to me. She was a lot older to me and being the new girl in school, truly was difficult. My life changed and it was a harsh wake-up call. When I found out all the things that was said about me, I grew angry of myself. I felt like I should belong somehow but how? Naturally, I had to make friends but even that wasn't easy.


As you know, there were mean girls in my school, who apparently had standards about people becoming their friends. I didn't have any so I decided to aim high. I wanted to become a part of their group. Talk about being ambitious. I did everything they asked me to do for them apart from the hanging out with them bit. I bought food for them, waited in line for them, tried to do their homeworks and their projects too. That was foolish of me. I never knew that I was already being used. In the end, I never really got into their group of friends. They said that I wasn't girly enough to be a part of it. That enraged me but it was also the time when I realized that I should embrace what I truly am. I found friends later on that eventually became real friendships. Athough I never really experienced being in an all girl group of friends before. I never knew what it was like to be 100 percent girly.


As I became an adult, I did have a group of girl friends but apparently, I guess it was too late for me to reform my ways. My group of girl friends, didn't go to a salon to get our hair done or to get our nails painted, instead we went to the arcade to play some games or we went to the court to shoot some hoops. We never went shopping together, instead we went ghost hunting together. The clothes that we wore weren't fashionable and they definitely did not make us look feminine at all. Somehow when I think about it now, I realize that maybe my life would have been different if I became different. I don't really know how my life would have turned out but I believe it would have been classier and a lot posher than what I have now. But there is no use thinking about that now as it is already a bit too late for it.


I guess no matter how I try to change what I really am, I can never do so. Besides, why should I? If there is one thing that I have learned in the 26 years of my life, it is the fact that you can never please everybody and that being normal if overrated. Being just yourself is the way to go if you want to get the true happiness that you seek in this life and if you change, change because you want it for yourself not because other people want it for you. Nobody can dictate what you should be and shouldn't be in this life. You may be strange, you may be different to them but that is only because you are special. If only I knew that back then, then maybe I would have become a happier person. I just hope that more people will learn of this lesson sooner than I did. As my everlasting motto goes: "I am what I am and not what others say I am". Somehow I have to be content with who and what I am now even if this is not what others believe I should be. 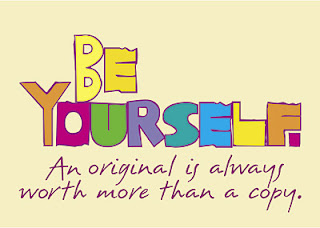 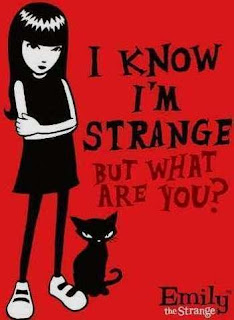 Only a few people dare to be different. Why not be one too?

At the end of the day, that is the most important thing of all. 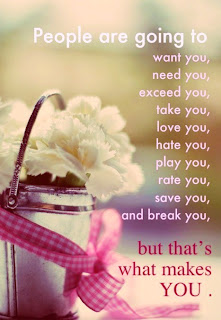 Never regret anything about you even if you know that you are different. You are different because that is what makes you unique and because being original is all about being just you.
Posted by kittypaws at 5:06 PM