Workplace Predicaments To Sigh About

I just feel targeted. Somehow I feel like this is an endless cycle that will never end. Although many people believe I am lucky, they also don't know that there is an unlucky side of me somewhere. It is like no matter how hard I try, people will always try to bring me down. Am I destined to be bullied forever? Did I bring this upon myself? Sadly, my experiences of being bullied in the past always haunts me as I continue to experience bad things at work.


I remember in the first online teaching company that I worked for. I was picked on by one of the Korean managers who kept on reporting that I wasn't doing my job when in fact I was. I was merely making new materials to make the classes livelier but to her it was as if I was only dilly dallying in paint. She reported me to the higher Korean manager and was scolded because of that. I cried as I know that I didn't do anything wrong. Nobody complained about it. Well, at least, none of my students did. It was just her who did it. I thought it would end there but too bad, it only rested for a while.


In another company that I applied for, I was expecting to be trained before going on board but unfortunately, I wasn't. I had to have consecutive classes from 2-11pm. I had breathers but they weren't too much. Most classes were only 10 minutes and they were all phone classes. After two days of being there, I was called upon the manager's office and was booted out because they said I didn't know what I was doing and that I was a bad teacher. I felt bad that time. I ended up leaving my favorite red jacket in that office as I refuse to believe that they would do that to me and that I was a bad teacher. I wasn't even given time to adjust.


Now, here I am again. Prior to being here, I was in another company which I thought would last. That company left me here only because it was for the best. I never chose to be in this company in the first place. I only did when I wasn't given anymore chances left. I just stayed because I needed a job and now, here I am facing this dilemma all over again. I need a stable job with a steady income especially now that my baby will be born next year. I want to survive till then but how can I if I will lose this job now? Somehow I feel like I should have left sooner and just worked somewhere else so that I would have stopped myself from being in this predicament that I am currently under but what's the use really?


I was already given a verbal warning last time that I might be terminated. I took that seriously and cried as I got home. I did better and now that I thought I was doing better, a written memo arrives stating that if things won't change then I will be forcibly removed here. On what grounds? Well, there is poor attendance which I can justify only because I know that it wasn't my fault. It wasn't like I wanted to be absent for two days while that nameless habagat flooded many areas in Metro Manila. I think my bosses expected me to swim in the flood just to get to work. Sad but true. Another reason is unsatisfactory performance. That reason was one reason that really made me angry.


How dare they say that? It was as if I am not experienced in teaching at all. It was as if I was a newbie in this industry and that I don't know anything at all. It hurts me that they did that to me. So today, I asked if there were any complaints from the students. I don't know if I will be given any but I want to know if there were any students that did so. That way, they can prove to me that it really was my fault. They said it was because I couldn't maintain a certain number of students per month. What can I do if the student has personal reasons for not studying? I can't force that student to stay right? It is sad that I always have to be the culprit. Are teachers to blame for such things? Perhaps partially but not as a whole. Sadly, that is what is happening here.


I didn't see anybody else being handed the memo. I feel like the whole "other people received that memo too" was just a load of bull but what can I do? I am merely an employee here. to me if this job really isn't for me and if they have no plans of regularizing me then they should say it now so that I might be able to resign and just look for other job opportunities out there. I don't think companies would still hire me if I am already far along with my pregnancy so I just hope that they can give me an answer soon. I am anxious, tired of all the games that they play and at the same time, fed up. I just want to move on and be happy somehow. As if things aren't bad enough already...*SIGH* 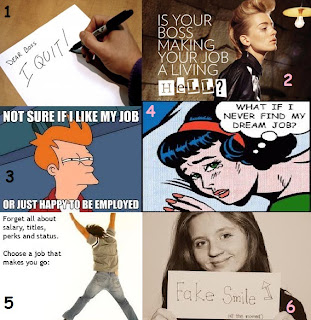 1. It is best to resign than to be terminated. That's a fact.

2. According to survey, most people in higher positions often make their subordinates' lives a living hell at work. Again, another fact. This is why workplace bullying is still legal in many offices around the world.
3. Something to ponder on. I am not certain which is which.
4. Anxiety eating up inside of me. What if I never find it? I am sure I will regret it for the rest of my life.
5. I wish it was that easy. If salary and perks didn't matter then I would have just settled for careers that won't pay me much and won't give me so much stress. Stress is after all, bad for my baby.
6. I wear a fake smile every day when I go to work. I am okay with my job. I just don't feel comfortable with my workplace sometimes...