I know that Christmas is already done. It is now the 27th and a rainy one too. I am lucky to have been able to spend some time with my loved ones last December 24th and 25th. I really appreciate it even if I wasn't able to help much due to my current condition. Sadly, not everybody was as lucky as me. I found out yesterday that most of my officemates in the later shift were not able to reach their families at 12 midnight on Christmas Eve. They had to stay at work until 11 PM which only gave them an hour of traveling time which wasn't enough for everyone. I read through our group messaging that one of the group leaders went home earlier than 11 PM which angered the Korean owner. I took the liberty to take a snapshot of the conversation in order to let people decide whether they think he did the right thing. I don't know why but somehow shouldn't they understand these holidays are important to us too? It is not like we get to have a lot of holidays. In fact, we don't follow Korean and Philippine holidays anymore. The management said we can follow just the major ones like Chuseok, Seollal, Christmas and New Year but why like this? Somehow I feel the injustice even if I am not the one affected by it. Sadly, nobody even complained about it. Everybody just said yes and thank you. What is the world turning into?

So, the group leader was stripped off her title and is now just a regular teacher. Somebody will be taking her place in the team, I guess but after what happened, I don't think there will be any takers. Our next holiday will be on December 31 and January 1. Somehow I can't wait for the long weekend to be here. Looking forward to the new year ahead of me too. Hopefully, no negativity will come my way. Unfortunately, I know that that is impossible especially after seeing the current exchange of messages I have been having online with a certain person who can't seem to move on. She has written down awful things on her wall which is her liberty to do so. Sadly, many people noticed. So, when I posted something about bitterness and negativity, she immediately thought what I posted was meant for her. She decided to strike back. It seems the troll just can't stop trolling this holiday season. What hurt me the most is the fact that she is my kin but she's just too far gone that we no longer can reach her. I don't think she will ever change soon so here I am praying for patience and understanding towards people like her. I wish she would just be happy for us. Clearly, she has said she is happy but why this? Why is she starting this fuss? Honestly, the way I see it, one can never be happy with this kind of baggage and I guess after seeing all the happy faces in the photos that were taken last Christmas, she couldn't help but lash out on whoever she wanted to. Some of the people who noticed the exchange of messages had mixed emotions. Some of them said I should continue teasing her with my posts when in reality, I don't think I want to do it anymore. Not because I am backing down because I am scared but because I think it is a waste of time. Some of them were irritated especially because she was being immature which doesn't really surprise any of us either. We are used to it by now.

The end of the year has brought two realizations because of the two incidents that happened to me or around me after Christmas. Selfish people will always value themselves over others and will always think that the world revolves around them when in reality it doesn't. Paranoid people will never know the true feeling and meaning of happiness and gratefulness for to them everyone is fake and they will forever be misunderstood. This is why people won't give much thought on the fact that in the end, these people will be lonely no matter how happy they think or say they are. Somehow I pity them but what can I do? Change comes from one's heart, no matter how much others influence you to do so. If you don't want change to come to you then it will never happen. Just a thought. 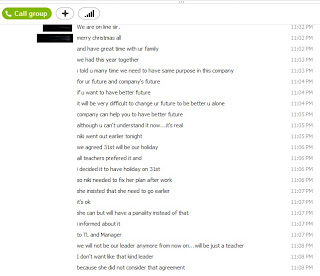 The snapshot that I was talking about. You decide whether this was appropriate or not. 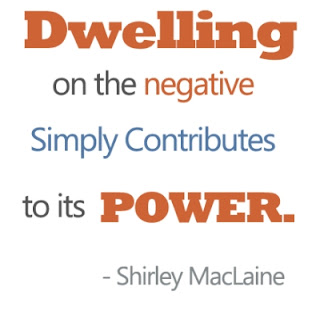 Exactly! Why can't people see that?

I will definitely not foster negativity this coming year. There is just no room for it especially since I need to be happy with my new life and the latest addition to our lives. I just can't wait for our baby to be born in this world and what a great way to welcome "IT" by giving it an environment free of negativity. Wouldn't you agree?
Posted by kittypaws at 7:23 AM