Here, Have A Slice Of Humble Pie!

I don't understand as to why some people think they are better than everybody else when in fact we are all equal. Okay, let's face it. Maybe we aren't exactly equal in terms of different factors involved however, nobody can really say that he/she is better than anybody else. For example, at work, you can't judge another person for not getting promoted only because you think that he is a slacker, that he doesn't deserve it, that he is incapable and that the only way for him to ever get promoted is for him to becoming a brown noser at work. Sure, that would get him far but have you ever thought of giving the person a chance, of thinking that maybe you have misjudged him or that maybe you thought of yourself too highly and that you've set humility aside? Seriously, I hate arrogant people who only think about themselves. The sad thing about these people is that they are insensitive to other people only because the only thing that matters to them is themselves. I pity these people for ever thinking of them that way. Sure, it's nice to have a little slef confidence but don't you think too much is just going overboard? How can anybody belittle anyone without even getting to know that person first hand? Yes, I am guilty of judging other people too but I only do after I get to know them better. That way nobody can tell me that I wasn't being fair and that I need to eat a slice of humble pie. I have met a lot of people who all need to eat their slices of humility pie. Some don't just need a slice but rather need to eat a whole pie for they have forgotten what it is like to consider others and what it's like to lower down their pride. All I know is that a person's pride can only lead to his/her demise. Those people may not know it now but eventually they will. If only they had listened sooner then perhaps a little change of heart would have made things right. Is it so bad to become humble and consider others every once in a while? Why can't some people just be considerate and nice to others sometimes? Are their hearts only filled with darkness that all they can ever feel for is themselves? I think not. I still haven't lost faith in some people. I just hope that I don't end up doing so in the future especially if all I see in this changing world is negativity and hate. Why can't we all just get along? 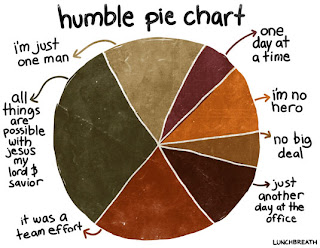 Here's how a humble pie looks like. Doesn't look familiar to you huh? That's because never in a day in your life have you ever had a slice of it. Try getting some now. 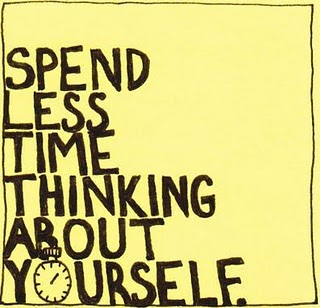 Try to think more about others instead of just yourself, you self-centered, cocky person! Try it! It's not like it's going to kill you or anything. What have you got to lose eh? 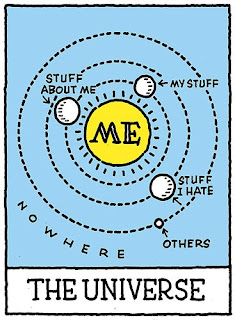 News Flash! The world doesn't just revolve around you but on other people as well so stop thinking that you are the only one that matters when other people matter too.

How can you change overnight? All you need is a little attitude adjustment and a whole lot of humble pie!
Posted by kittypaws at 10:29 PM