Why is it that people who are madly in love are bound to do dumb things? Does love have the power to make a person lose control over his head? Why is it that when we're in love, we can say an excuse like: We do stupid things when we're  in love  and hearing it  would not make others judge you but rather say Aww because what you said was romantic and cheesy at the same time?  There I thought that the power of thinking and reasoning could somehow topple down the power of love and passion. I am baffled by these things however they aren't new to me. Coming from a family who has had many experiences of the said situations has confirmed the said rumors. To me they are true. I cannot say that my actions and my decisions that were affected by my heart were all wise but I can say that I haven't done a lot of dumb things in the past. Even those outside my kin have confirmed my thoughts on people turning dumb when in love. Often times, they rant, vent or cry about their love lives. They curse the person that they love and vow to never love him/her again or not anybody like them ever again. I smile triumphantly when they do but somehow I feel they would turn their backs on their words in the end which happens eventually.


I've given a dozen advices. I've been a shoulder to cry on, a friend to lean on when troubled and most of all, a good confidante who gives out unbiased opinions and even fair thoughts on things. What I don't understand is why in the end after everything that I have done for them, they still end up choosing the loser who cheated on them, hit them, ignored them, lied to them - in short, wronged them? I know it is none of my business to whine about these things as its not my life I am talking about here but the fact remains that I care. The lives they have may not be mine but I am still partially responsible for them as I was there with them when they needed someone to support them. I was merely doing my job. In the end when they still do not listen, I feel used. Its like after everything that I have given to them, they make me feel like they would straighten their acts now and move on to greener pastures and then end up going back to the same old lives that they so wanted to leave behind in the first place. Its like everything is futile. All that for nothing. Gee, thanks very much!


Regrettably, as much as I want to be the good person that I am, I do not think it is advisable for me to do so. Why? Because I am tired of being this way. I am tired of being used up and then just forgotten in the end. I am tired of people promising me things but never really fulfilling them. I am tired of putting up with false hopes that never seem to come to the fore. I am tired of people treating me like they need me now but have no use for me later in their lives. I just want people to treat me properly. I am not asking for much. Treat me as I have treated them and listen to me as if their lives depended on it. I may not be right all the time but if my opinions and thoughts do not matter to you then why the hell do you have to ask of them in the first place? I grow weary of these kinds of games.


I guess this is my cue to say that I have learned my lesson which I did. I am not going to meddle in love lives any longer no matter how hard anybody I know - close to me or not - tries to make me be involved. If they seek my advice, all I will say is the truth and just leave it there for them to get if they really want it and leave if they don't. I swear not to get emotionally attached nor involved in anybody else's life ever again. I am not the effin' Love Guru. I do not see the future and I do not hold any power over relationships. I don't understand why people come to me for love advice. Sometimes I guess it is best to be rude but that's just me. Love is a powerful feeling and it is overwhelming. I believe that no matter how strong it pulls you and makes you feel all warm and good inside, you can succumb to the feeling. You can still cherish and savor it but please keep your mind intact at all times. For decicing on things using one's emotions can either be biased or if not prejudiced. Our head has been placed above our hearts because it holds our brains which we use to think and therefore, the brain is the most essential tool to use when in doubt.


The heart can be used later on once everything else is sorted. So, I am stopping myself from being a hypocrite. I am no longer going to roll my eyes while nobody's looking just because they didn't follow what I have said to them. This time around I am leaving them all be to make their mistakes over and over again with high hopes that somehow in the future, they will bump their heads somewhere and realize that I was right and that they were wrong. That their lives could have been better if only they had listened to people like me in their lives. Love passionately but never forget to always think thoroughly. 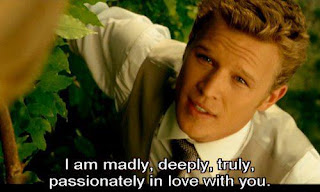 It's ridiculous to know that love can move people to not only  do good things but also bad but who am I to say if something is good or bad? I am not  other people's personal Jiminy Cricket! So go ahead, climb a balcony if you will to see the love of your life, kill yourself when you hear that the other has died like Romeo and Juliet, climb the highest mountain just  to shout that you love him or her, go back to your loved one even if you know that he/she doesn't treat you right, marry who you love even if you know  he/she will never be faithful to you and will always choose something else of lesser priority than you. Honestly, I just shouldn't care anymore. It's your bloody love lives anyway  but don't come back saying the same things over and over next time cause this time, I will really tell you, you do not have the right to complain for you had this  coming. I know you do not deserve this but you had a chance to change and yet you still did not leave. This is  your fault so don't go blaming anybody else. Like a moth to a flame, when you go near the flame, you get burned but if you are wise enough, you only  get burned once and never again. Please  think of yourselves more next time.
Posted by kittypaws at 5:50 PM